I took Miranda up to our local pick your own fruit farm this morning. Local-ish, we live in hilly livestock farming country, not rolling crop farming country. I mostly wanted to make a batch of strawberry jam. It’s been a couple of years since I made any jam – last year was a rainy summer where I didn’t manage to find a dry spell that coincided with the freedom to pop up to the PYO.

So we went and picked strawberries. The strawberries were lovely – planted up on tables under poly tunnels – no back breaking leaning down to ground level and loads of just ripe fruit. 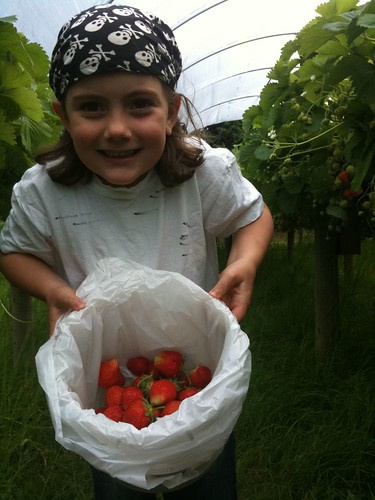 Then we went and got a few raspberries. I’m not such a fan of raspberry jam so these were intended for  breakfast with yoghurt.

And then my five year old fruit fiend wanted to know what other fruit we could pick. So we ended up picking a portion of gooseberries and some blackcurrants too. We got mildly confused because the currently yielding crop was red gooseberries. I rather expected Miranda to turn her nose up at the gooseberries as I wasn’t at all sure I liked them myself, but she turned out to love them, as indeed did I. Maybe this variety weren’t as tart as I remembered them.

We arrived home with our haul. 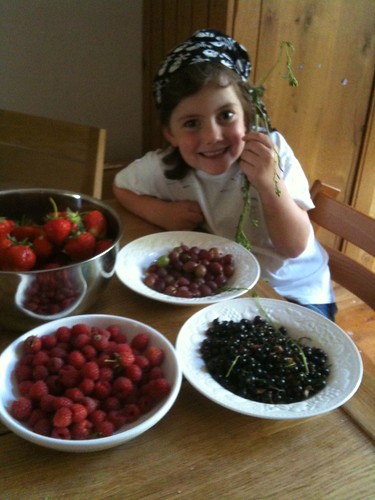 I’d already earmarked the unexpectedly nice gooseberries for gooseberry fool – with only a vague idea of how to make a fool. [I more or less followed this recipe, you just fold together whipped cream, cold custard & gooseberry puree.] I wondered what to do with the blackcurrants. I googled for a recipe for blackcurrant jelly… and got sidetracked by a recipe for cassis….

I know people make flavoured vodkas with soft fruits – I’ve mostly heard of it as a way of using up a glut of hedgerow blackberries – but I’d never tried it myself or realised you could use any old spirit and/or turn these into liqueurs at  a later date. Plus I think I had it in the same box as home brewing and winemaking – which I like but can’t currently be bothered with the ins and outs of.

A quick flick through numerous recipes led me to believe that there was no right or wrong way to go about making liqueurs. The basic recipe seems to be

The recipes I found were all over the shop with regard to quantities, but the only major variations seemed to be whether you included the sugar in step a) or waited until step d).

I played it by ear and made up some blackcurrant vodka, some raspberry vodka, and then acting on random internet post decided to try half white rum & half vodka with the strawberries. I’m already thinking blackberry brandy might be a good future addition.

The plan is to leave the bottles until sometime before Christmas and then see about carrying on at step c), probably following d) for some of the produce and certainly partaking of step e).

I’m very pleased with the results of my (and Miranda’s) labour and am planning on going back for more fruit now! 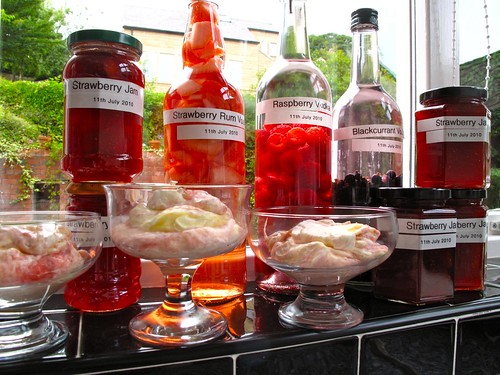 A Bird In The Hand (George & Molly Palmer-Jones, #1) by Ann Cleeves.

Across the Pennines for a spin around Dovestones r

The long way round to Slaithwaite (one of them any

And the winners of this years Holmfirth Fashion Fe

Today’s highlight was going through 400m of the

We have made it round to the Grand Union Canal! Th

We couldn’t have moored up much closer to the pu

We’ve found our captain of the @blueotterboats f

A ride to Dewsbury where I collected my free birth