I thought I’d follow up on my post about the Strawberry Cheesecake Cupcakes I made the other week as I tried out a second recipe from The Hummingbird Bakery Cookbook and had a much better experience with the recipe this time. 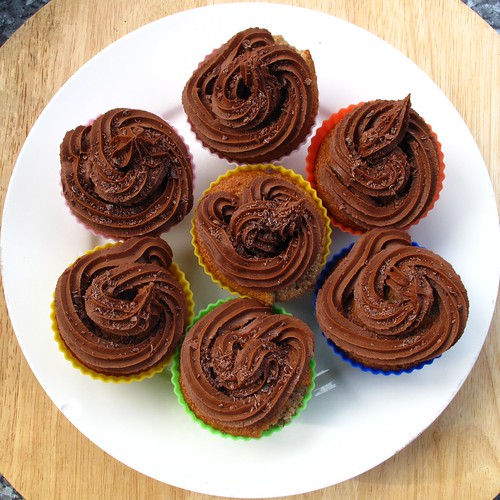 This time I made the banana and chocolate cupcakes. I used my silicone cupcake cases which are slightly smaller than the paper “muffin” cases I used last time, but bigger than regular paper fairy cake cases. In these the recipe made exactly 12 cakes with a couple of them overflowing the cases in the oven. The chocolate frosting was the exact right quantity – there was a bit left in the piping bag but I wouldn’t have got all the cakes iced with any less. The only thing I thought was wonky was the amount of chocolate they suggested grating on the top. I can’t remember how much they suggested but I know I only used a fraction of my Green & Blacks for grating before eating the rest whole!

Next time I’ll probably put a bit more banana in the cake mix as I didn’t think they were quite banana-y enough but that’s just a getting-the-taste-perfect issue not a recipe problem. They were lovely!

Previous Grrrr Next This looks simply amazing! Pity it’s all the way over in…

A Bird In The Hand (George & Molly Palmer-Jones, #1) by Ann Cleeves.

Across the Pennines for a spin around Dovestones r

The long way round to Slaithwaite (one of them any

And the winners of this years Holmfirth Fashion Fe

Today’s highlight was going through 400m of the

We have made it round to the Grand Union Canal! Th

We couldn’t have moored up much closer to the pu

We’ve found our captain of the @blueotterboats f

A ride to Dewsbury where I collected my free birth