or, how to get a round cake into a square tin. 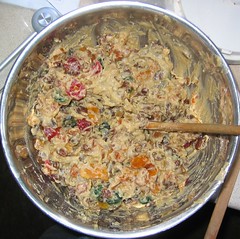 Every year about this time I think about making the Christmas cake and find lots of recipes for circular Christmas cakes. But Christmas cakes, in my eyes, must be square! This is probably mostly because my mum made square cakes in my childhood but also because square cakes are much easier to cut into slices of the exact size you feel like eating. So every year I find myself wondering how to convert a recipe for a round tin to fit in a square tin.

I see the inklings of a rule of thumb “A cake meant for an n inch round tin can be made in an n-1 inch square tin” – but how useful is that?

I only care about the area of the round/square tin, not its volume, as I generally want the cake to be the same thickness whatever shape it is. What I want to know how close together these areas are to know whether our rule of thumb holds across different size cake tins.

I like graphs so I plot this function. Wolfram Alpha is great at this. (Cue wavy line story about the old days when we had to write graphing code with our bare hands, uphill both ways, with only a 80386 processor between us.)

I ask Wolfram Alpha to plot “plot pi*(n/2)^2 – (n-1)^2 between n=5 and n=15” for me. The limits are there because a cake tin smaller than 5 inches diameter or larger than 15 inches diameter is not something a domestic cook ever needs to worry about!

So it looks like the rule of thumb holds up pretty well between about 7 and 11 inch round tins, below about 9 inches we have a bit too much batter to fill a square tin of an inch smaller size, and above that we have not quite enough. From 11 inches on it looks very much like we have a lot less batter than required and will end up with a thin cake. But I haven’t accounted for the fact that there will be more batter anyway in a bigger cake. I ought to look at the ratio (or percentage) of how much less batter we have to what we need rather than just how much less we have. To do this we divide the extra area from the above formula by the area of the square tin. In Wolfram Alpha speak that is “plot (pi*(n/2)^2 – (n-1)^2)/((n-1)^2) between n=5 and n=15“.

To me this sounds well within reasonable limits and I’m happy to say that you should always make an n inch round cake recipe in an n-1 inch square tin.

The only thing that’s bothering me now is that thin cake in a big tin – when would you be better off moving to an n-2 inch tin to get a thicker cake again? Back to Wolfram Alpha again… I won’t spell out all the details as by now you will either be with me or completely lost, but it looks like at about a 14 inch round tin you could either use a 13 inch square tin and have a cake 10% thinner, or go down to a 12 inch tin and have a cake 10% thicker than the round one. 12 inch square Christmas cakes are a bit out of my league though, after all there is Christmas pudding and gingerbread houses to get through before you even get to the Twiglets so I think I’m happy with my rule of thumb!

Primary schools always tell you that maths is useful for cooking, and so it is, I think they had basic arithmetic in mind really though!

And just in case anyone reading this is actually planning on making an n inch round cake in an n-1 inch square tin my experience is that the cooking time is about the same and usually depends more on the idiosyncrasies of the oven than the mathematics of cake volume. 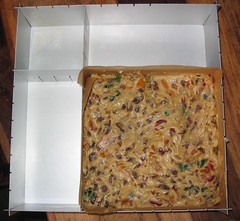 Playing with the Snow

This blog is looking a bit neglected. Never mind – I’ll get back to cherishing it at some point soon.

Latest thing I didn’t have time for but to hell with it did it anyway project: UK Snow Map grabbing people’s tweets from twitter, where they’ve detailed the snow reports in their postcode area using the tag #uksnow, and mapping them.

I wish I could get the “twitpic”s that people have posted into the page too, but there doesn’t seem to be a non-convoluted way to do it.

Because Darren didn’t read the instructions (there I’ve got that out of the way, I’ll be nice to him from now on!) he bought a copy of Windows Media Center 2005 to install on his iMac. The Intel iMac will run Windows, but only some versions are supported by Boot Camp. The big problem with the installation turns out not to be some esoteric computery thing but comes down to the fact that this version of the OS comes on two CDs and Apple don’t like to ruin the line of their computers with CD eject buttons. The only CD eject button is on the keyboard and the Windows installation won’t recognise it until after you’ve installed Windows and added Apple’s device drivers. And you can’t install Windows because you can’t get the first CD out to put the second one in.

I found plenty of talk about this problem on the web. People have certainly managed to do it. They mention putting the second CD in an external CD drive (we don’t have one) and there is lots of talk about burning a bootable DVD using some convoluted commands in Nero 6 (we don’t have that either). There’s also talk of putting the second CD onto a USB key drive (we have one of those, but not big enough to contain the CD, or even 1 file of it!).

I managed to install Windows Media Center 2005 eventually using nothing but a writable DVD – the iMac already has a DVD burning drive. I’m working from memory but the process went like this.

That’s how it worked for me anyway – and Darren is now busy playing Age of Guilds & Warcrafts of Doom, or something. I’ve elided all the dead ends and false starts of which there were many…. If you feel I’ve left anything out of the above – I’ve tried to be too detailed rather than too curt – let me know.

we bought one of these seats last week for miranda to use at her grandma & grandad’s dining table. cheap and cheerful. and the instructions are wrongly illustrated. it’s simple enough when you’ve sorted it, but impossible if you’ve tried to follow the instructions.

there isn’t one long strap to wrap through the two slits in the chair and then buckle underneath. you can’t splice the two halves of the strap together. what you need to do is put each half of the strap through a separate slit and trust in the sewn together bit on the end to hold the strap to the seat.

also the photo on the web shows the seat strapped to the back of a chair, and the instructions claim it should only be fastened to the seat of a chair. your guess is as good as mine as to which is correct.

zero marks for clarity. and for the “advice line” but i already ranted about that.