We had a family break in Amsterdam, it was the second time we’d visited, and I wanted to take a trip out of the centre of Amsterdam to get a bit more milage out of our hire bikes. In the UK we try to research carefully before taking our eight year old out on the roads and trails, too much traffic or too many hills make for a miserable time for all rather than an enjoyable ride. In the Netherlands you know there won’t be the hills, and that the bike infrastructure will be good, but I was still a bit uncertain about taking a longer bike ride.

We’ve had a couple of hair raising incidents on bikes in the centre of Amsterdam – mostly down to the adults not being entirely familiar with the way of bikey things in another country: we didn’t realise the tram lights would only give a ten second window for bikes to cross (we stuck to waiting for the green man and walking over tram lines after that) and we got a bit confused over the presence of speeding mopeds on bike paths too (apparently they are supposed to be there, but I’m guessing they aren’t supposed to act as if they are there to run everyone else off the road either). I know we’re the annoying tourists on hire bikes to the locals, but we’re not the only ones and we have a really good time riding around.

Looking around the tourist attractions we spotted Molen van Sloten, a working windmill open to visitors on the edge of Amsterdam. It got good reviews and we decided to spend a sunny day going out to visit it. I’ve plotted the route we took on a map as it turned out to be a glorious ride.

I’ve started the map from by the Rijksmuseum on the edge of Amsterdam city centre as anyone who visits Amsterdam will find this area. We were actually staying in the Plantage area in SE Amsterdam over to the east of the map which added a couple of miles on to each leg of the journey.

The route took us through Vondelpark, a marvellous city park with lakes, playgrounds and cafes and we stopped off at the paddling pool so Miranda could play for a while. 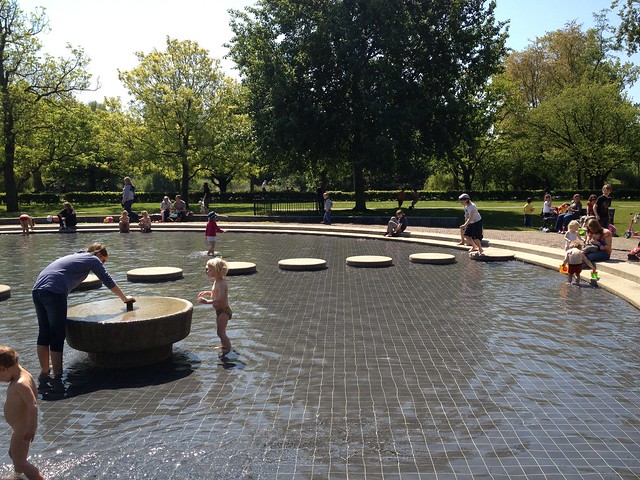 The bit of the route after the park is the bit I would change if we went again as it took us through a busy junction (Hoofddorpplein) that was a bit tricky to navigate with an eight year old. I think I would go straight on after leaving the park and crossing the canal and follow the road round. In fact I think this is actually the way I meant us to go but I find looking after Miranda cycling, not losing Darren, and navigating a bit challenging at times! It did however take us past a bridge that was lifting to let a big boat past which is always a bonus. 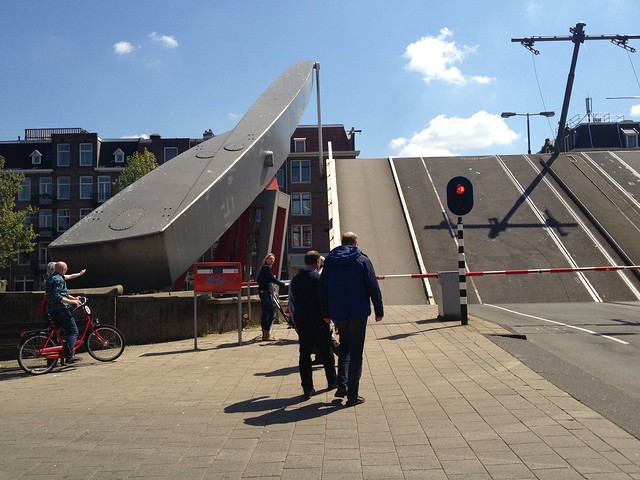 Once we got onto the main road out to Sloten, it goes by various names but seems to be the S107, the road was fabulous. We were cycling along an almost deserted bike path in the dappled shade of the trees with the canal on one side totally oblivious to the wide road passing by on the other side of us. What had worried me were the number of roundabouts that we needed to negotiate. I won’t worry again – when a Dutch cyclist approaches a roundabout they zoom straight across the bike path and the cars stop for them. It’s marvellous. 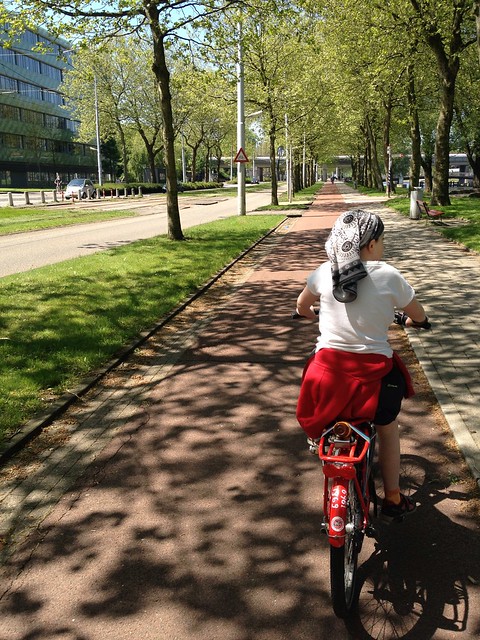 And when we got the windmill it was worth the trip. It’s not a highly polished tourist attraction and it has one of those mish-mash museums full of model ships, barrel making and other almost random exhibits attached. But the tour, in English, from a highly knowledgable guide was fascinating. The mill is still working, though the miller was on holiday on the day we went (which meant we could get up close to the sails), and is used to pump water out from one set of canals to the next in order to keep Holland dry below sea level. It had never really occurred to me that windmills did more than grind flour but now we know all about NAP water levels and how to signal messages from town to town with windmill sails. 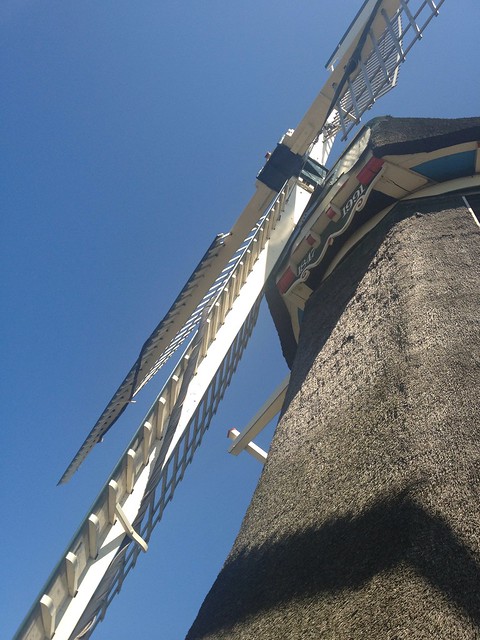 All in all it was a lovely day out, we stopped in Vondelpark again on the way home for coffee, chocolate milk and bouncy castles. The ~14 mile bike ride was well within Miranda’s capabilities and it was nice to get out of the middle of Amsterdam (much as I like it!) and see a bit more of the area.

One reply to “Amsterdam Day Trip to Molen Van Sloten”

You can find me on instagram, storygraph, flickr, mastodon, facebook, ravelry, boardgamegeek and last fm among others, but I'm more at home here in my own space than in those other places. Places I no longer frequent are goodreads, pinterest and twitter.

How to Sew Like a Mathematician: An investigation of toroidal bias tape 20221226

Interesting idea for making the cost of adding semantic markup to web pages be basically negative. I hope it gets somewhere! 20221219