If my family has a religion then it’s Lego. Other families dream of Disneyland but it was certainly Legoland that my siblings and I aspired to visit. When we were kids that would have entailed a trip to Denmark so we never got to fulfill our dreams. It was only last year when my daughter was old enough that I finally got to Legoland, Windsor. Our verdict on the Windsor park was that a Saturday in June was a stupidly busy time to go, that the queues were horrendous, and that we loved it, and we’re planning a trip back on a quieter day sometime.

So I was ecstatic when I saw that they’d built a “Legoland Discovery Centre” in Manchester, less than an hours drive from us. Obviously it’s tons smaller than Windsor, it’s all indoors, the tickets are a third of the price but we still expected it to have that special Lego spark in abundance.

As it only opened a few weeks ago I thought I’d write up our impressions of it for anyone who’s thinking of going. 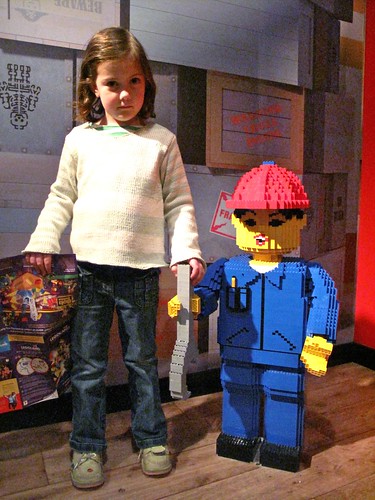 Lego Factory – nice entrance to the centre but not that exciting. see plastic pretend to turn into lego bricks while kids in the group turn dials and spin levers. get a lego brick at the end.

Kingdom Quest – the only ride. you don’t seem to be able to go back for another go round. staff putting you on it don’t explain that you have a laser gun each to shoot things so you spend half the ride figuring that out and then trying to get the guns to work. fun but we’d have liked another go once we’d figured out what to do.

Lego Studios – 4D cinema – that’s a 3D cinema plus wind, rain etc. we liked this at Windsor and this was the same thing and just as good. pleased we saw a different film here though – this one was Bob the Builder building a roller coaster. 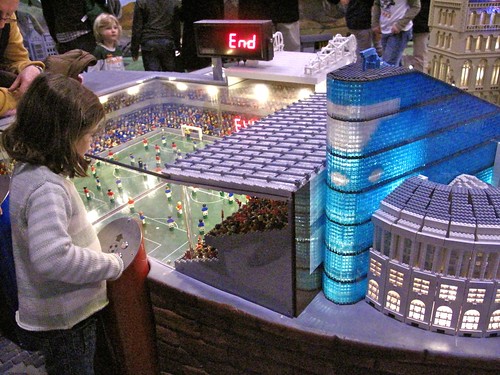 Miniland – bits of the north of england built out of lego. nice to see manchester, liverpool, blackpool, canals etc but there was a lot less than I was expecting and various scenes seemed to have been damaged already.

Lego Racers Build & Test – build a lego vehicle and test it on the track. there didn’t seem to be enough wheels to go round. the track was neat and let five vehicles race against each other but could have done with a staff member to supervise. miranda’s vehicle got knocked out of her hand in the rush to get one of the five spaces on the track leading to tears. it looked like the same group of older kids were dominating it and we couldn’t be bothered to fight them really.

Duplo village – build with duplo. think miranda enjoyed this as much as anything as it was quieter and she could build in peace. you could also build on plates that would then shake like an earthquake which we all enjoyed!

Master Model Builder – this was a show with a leader taking you through building a lego model i think. it was full everytime we looked and the displayed showtimes were clearly wrong so we didn’t get to have a go at it. as there were clearly limited spaces some kind of queueing system would have helped.

Princess Palace – Miranda didn’t go near it but i think it was just bins of lego to build with an excess of the girly coloured pieces.

Cafe – didn’t look to be anything great. tables all taken up by adults waiting around for playing kids rather than people eating. we went over to the Trafford Centre to eat.

On the way out to the shop there was a game to play – stomping on lights on the floor to solve a puzzle. don’t think the stomping and the puzzle solving bore any relation to each other though.

Shop – shop seemed low on stock. pick a brick department looked depleted and build a minifigure section had no bodies left. prices weren’t displayed on shelves and were hard to find on the boxes. of course we left with several boxes of lego but would have liked to have had more choice and there was nothing like the range of souvenirs that they have at windsor.

Overall it didn’t make a good impression on us. At £33 for a family of three it wasn’t a cheap day out, and nor was it even a “day out” as we’d stretched our visit out to make it fill a couple of hours. Of course Legoland at Windsor costs more than that just for one adult but there’s so much more to do at Windsor that you can’t really compare the two.

Staff were wearing t-shirts saying “ask me about unlimited annual passes” and I’d like to have wanted to but there was nothing here to make us want to visit more than once every couple of years at most.

On the positive side it wasn’t too crowded, they look to be selling out on pre-booked tickets and not trying to pack in thousands, there was plenty of lego to play with, the ride and the cinema are good. It’d be a good place to visit on a rainy day and we could have spent ages building lego models, but then we could stay at home on a rainy day and tip all our lego onto the table….

We’ll make the pilgrimage to Windsor again, but the Manchester centre is a poor substitute. We enjoyed ourselves there for sure, but left vaguely disappointed at the experience. 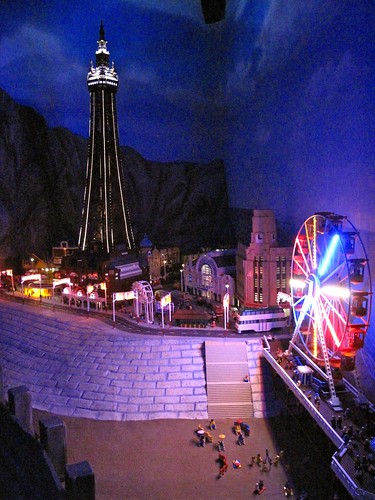 The Kindly Ones (A Dance to the Music of Time, #6) by Anthony Powell.

Feeding Britain: Our Food Problems and How to Fix Them by Tim Lang.

The Address Book: What Street Addresses Reveal About Identity, Race, Wealth, and Power by Deirdre Mask.

The Apartment in Rome by Penny Feeny.

In a change from cycle path barriers you can’t c

Pootling about from Uppermill on the western end o

Misty morning ride to Godrevy Head, where I couldn